This blogpost explores some differences between scrum teams and work attitude in the Netherlands and in Belarus.

Soligorsk
Last month I visited Soligorsk, a city of 100.000, situated 120km south of Minsk, the capital of Belarus. Soligorsk is a young town, founded in the late fifties to house the workers of the giant nearby Belaruskali salt mines. Single-industry cities like Soligorsk are a typical Soviet holdover. Many of them got into dire straits as their industries went bankrupt after the Soviet collapse.  Not so for Soligorsk, the salt mines still fare strong and the city looks rather prosperous compared to its belarusian peers.

I visited Soligorsk because it is the residence of one of my nearshoring software partner companies, one of the two IT companies in the city. I visited their office and got to meet in person the software engineers, all man and women in their twenties, that I had been working with from remote already. During my stay I witnessed their mode of coöperation and got a unique view into how they handled Scrum.

Scrum
I have been doing Scrum on scores of projects in the Netherlands and it was fun to see it done here. The general process was rather similar from what I had witnessed before. It was the spirit and the family-like bonding of the team that struck me as different and got me thinking.

One of the things that I learned on Scrum projects, and that I witnessed other guys learn, is how to really act as a team. This kind of teamwork was a really new for me and radically different to what I had experienced on the non-agile IT projects I had been on before. In Scrum, the team is regarded as a single actor. It commits to finishing an estimated amount of work as a single actor. It fails or succeeds as an undivided entity, and takes credit and blame as a one. Putting team goals over individual goals has a cleansing effect on super ego’s and one-man-army programmers. Either they start to collaborate and become team hero’s instead, or they decide Scrum is not their thing. 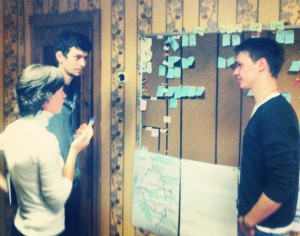 Better collaboration?
I am no fan of making generalizing statements on national personality traits. I believe that inborn variety in personality between individuals outranks cultural differences between nations. Still, I believe that the team aspect of Scrum comes more natural to Belarussians than to the Dutch. Thing is that in societies where state is not taking care of people too much, or in the case of the Soviet regime, presented an imminent danger to its people for a long time, bonding between people is just stronger. In such societies, helping other people out, and especially the ones near to you, is an even more sound survival strategy than it is in western societies. This left-over cultural trait of easy bonding and co-operationalism comes in very handy when working with Scrum teams.

Different work attitude?
One other difference I noted is about drive and commitment. Again, risking to overgeneralize, I would say that young IT people in Belarus are more eager and willing to work hard and make long hours than their dutch counterparts. This is no left-over from a communist past but resembles work ethos in other economic developing countries. Being smart, well-educated and tapping into the global workplace allows young people to make a very nice leap upward towards middle class lifestyle that there parents, factory and kolchoz workers, have never seen. A goal worth working hard for.
In the Netherlands, on the other hand, it was our previous generation that made this leap for us. Our current generation of people in there twenties/thirties has a different sense of entitlement and brings a somewhat different work attitude.

Conclusion
So, should the conclusion of this post be that Scrum and Agile Development are just better done in Belarus, or any nearshore post-communist country, than in Western-Europe? No, that is too easy. First of all, after having done just a handful of Remote Agile projects with only a few teams yet, I feel this is really to early to say. Secondly, there many more factors that should be taken into the equation, like for example, drawbacks. But that’s for another post.

Plance is an IT-company with a focus on web development, java-projects and test automation. We solve your IT-problems step-by-step while keeping our eyes on your business goals. Our experience and creativity lead to simpler solutions that are more easy to use and maintain.

On most projects we collaborate with developers from Ukraine and Belarus. Our front-office is Dutch and English speaking.